skip to main | skip to sidebar

The Real and the Unreal

The common man is a metaphysical realist. What he has forgotten is that he is also a moral realist. He knows perfectly well that the world is real, that he is satisfied with a good dinner, that his home is his castle, that his children are under his authority, that his wallet really stores his money, that his money really affords him comfort and food and stability. He really knows that he loves his mother, and that he loves to argue with his father, and that where he and his father meet in agreement is sacred space. He really knows and loves the objects and people in his life because he really loves his life. Most men even love the object of their lives, Who is God.

But a strange amnesia has infected his speech, and to some degree even his thoughts, about his commitment to moral realism. Everyone knows that some actions are morally right while others are morally wrong. It is wrong to murder your brother; it is right to love him. It is wrong to be indifferent to the sufferings of your neighbor; it is right to help him. It is wrong to torture an animal; it is right to treat the animal in accordance with its nature. But even in this last example, something has gone wrong in the mind of modern man. He imagines that the animal enjoys a dignity commensurate with his own. He imagines that he has raised the dignity of the animal to that of his own; he doesn't suspect that he has merely lowered his own to that proper to the beast. He doesn't imagine this because he still knows that his life is sacred, that his brother is loved, that his neighbor deserves his attention, and often, that God is his creator. But he has forgotten that if God created him in His image, then he enjoys a dignity that is intrinsically higher than that of the beast. Christ was not a squirrel. A dog was not nailed to a cross to atone for the sins of Fido. This is because the dog lacks both an intellect with which to uderstand sin, as well as a will with which to commit it.

We could forgive the modern man for neglecting his proper role in creation if it only resulted in a common delusion about Fido. But in fact it results in a mass delusion about everything and everyone, including and most especially God Himself. Modern man has lowered himself to the level of a beast because he enjoys sinning but still, as ever, hates to have sinned. In fact, this was Adam's sin, constituted of pride and effecting his being thrown out of the garden. Modern man imagines that he is still in the garden, or rather that he still has dominion over the garden, or better still that he merely imagined God's authority in the first place, or even better still that God never existed at all. Modern man must invent this fiction if he is to rid himself of the burden of responsibility before God. Ironically, in meaning to supplant God's will with his own, modern man has actually lowered himself, not to the level of the noble beast, but infinitely below even that. This is because it is man's dignity and destiny to be taken up into the divinity of God, to be deified with Him, in Him and through Him. This is God's will, which is entirely gratuitous. God loves us more than we can imagine. When we reject that, we reject the greatest gift ever imagined. Our fate is then proportional to the gift we have rejected. This is the nature of hell. To be forever without God, always and everywhere totally absent from the source from which and for which we are made. These are the stakes of true freedom.
Posted by Jon Winterburn at 9:38 AM No comments:

There Is Only the Church and the World 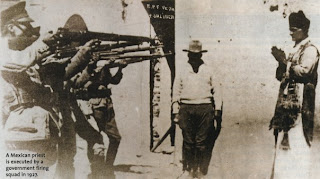 Pray that we are all given the grace of the holy perserverance of the martyrs.  O Mary, Mother of Martyrs, pray for us who have recourse to thee.
Posted by Jon Winterburn at 3:07 AM No comments:

It is the contribution of our age that our whimsy has become our dogma. Being mere whimsy it cannot hope to satisfy the purpose of dogma, but for its very arbitrariness it must be all the more dogmatic.
Posted by Jon Winterburn at 9:37 PM No comments: 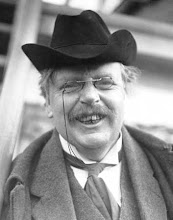 Jon Winterburn
I am a backwards, unenlightened, and happy Roman Catholic convert who stridently insists upon the goodness of God, the Fall of man, and the Solution. I live in Chicago with my wife and our son and daughter.